I am perpetually stunned how one or two people can have such a huge influence over market share, global trends and fashion. The heads and CEOs of major companies have untold power, and like everything, you don’t know how much until it has gone.

In today’s Guardian is an article about how Apple are and will struggle in the continued absence of Steve Jobs. Apple is one of the most recognisable brands in the world and continue to innovate at the highest level. You would think a company with such a huge amount of staff and expertise wouldn’t miss one man, but they do.

Apple’s recent keynote speech, Steve Jobs’ expert field, was run by Vice President Scott Forstall, a worthy successor and a key part of their success. But even he dropped a handful of clangers, a mistake that simply wouldn’t have been made under Jobs.

Now we all remember in the 1990s when the power shifted from Apple to Microsoft. What changed that could have created such a shift? Steve Jobs wasn’t running the show then and Bill Gates was, at Microsoft. Fast forward a few years and the trend reverses. What could have brought that on? Steve Jobs muscles out great designs and ingenius partnerships (music industry and iTunes) at the same time as Bill Gates starts handing over control of Microsoft.

Are these differences because these people are just truly special businessman, creatives, deal brokers and people managers? Perhaps they had too much control and their lieutenants couldn’t possibly take in all the information and knowledge their autocratic leaders have developed over the years. 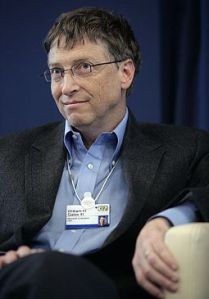 The fact is all people need to be lead to a certain extent and a great leader can inspire untold success through force of character, vision, hard work and focus if their troops are willing to follow.

Let me know your thoughts on this. Are you a business leader with an opinion or are you a member of staff that has overachieved thanks to strong leadership? Maybe you have an opinion on Jobs and Gates, just get in touch.

One response to “It takes great leaders to make great businesses”